What is the “Stand Your Ground” Law?

What is the “Stand Your Ground” Law? 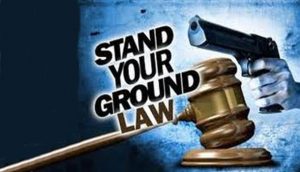 The “Stand Your Ground” law has unleashed a swirl of debate since the 2012 controversial, high profile death of Trayvon Martin. It is a complicated subject that incorporates our right to self-defense into Florida’s legal landscape. Since its inception in 2005, the law has been commonly invoked in cases ranging from home invasions to domestic abuse. Understanding the “Stand your Ground” law is integral to understanding the legality of your actions should you be involved in an act of self-protection with a firearm.

The foundation of the “Stand your Ground” law was born from the opposing concept of “duty to retreat.” Duty to retreat was derived from a common law stating that it is a person’s responsibility to do whatever possible to remove himself from a physically threatening situation. Conflicting with the idea of justified self-defense, duty to retreat claims any and all steps should be taken to avoid a physical altercation in an impending conflict. The “Stand your Ground” law, on the other hand, does not impose any requirement to retreat if threatened. It is a law that, as its name implies, permits you to stand your ground and defend yourself, another person, or your property.

Inception of the “Stand Your Ground” Law

The “Stand your Ground” law was created because of concern that duty to retreat leaves little opportunity for self-defense. The new law states that a person has the right to physically defend him or herself or another person without legally being required to attempt to flee first. The idea behind the law is to protect potential victims of assault who legally use force to defend themselves against harm. In certain circumstances, the “Stand your Ground” law allows you to avoid a trial by claiming self-defense.

The justification of “deadly force” to protect yourself is especially useful in cases such as home and vehicle invasion. These cases in particular demonstrate that having nowhere to retreat leaves only self-defense as an option.

Despite its aim to protect those acting out of self-defense, the “Stand your Ground” law has been a source of debate since its inception by Governor Jeb Bush in 2005. Critics of the law claim it is promoting gun ownership and a vigilante atmosphere. It has been hailed by opposition as the “shoot first and ask questions later” law. Meanwhile, defenders define the “Stand your Ground” law as a fundamental human right to defend your home, your family, and yourself.

If you are facing criminal charges after using force to defend yourself from threat or harm, it is in your best interest to hire a skilled criminal defense attorney right away. Finding a legal team with knowledge, tenacity, and experience is imperative to obtaining the outcome you deserve. Attorney Timothy Armstrong has been successfully defending clients in Duval County and Northeast Florida since opening his practice over ten years ago. He has defended clients with charges ranging from misdemeanors to homicide, and he wants to help you. Contact the Law Offices of Timothy Armstrong for a free consultation about your case.

Florida’s Heroin Abuse is Reaching Epidemic ProportionsPrevious Post
Can You Choose Not to Have a Jury?Next Post
Request a Call Back