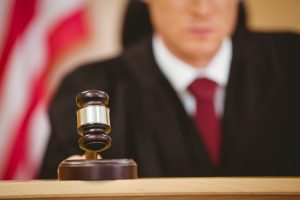 If you have been arrested for a crime and have been released either on bail or on your own recognizance, you will need to appear in court for the hearings scheduled in your case. In a typical trial, there will be several hearings at which your presence will be required. It is critically important that you show up for each of these hearings. Failure to do so can have serious consequences.

In most cases, once bail has been set, there will be three primary court dates at which you will be required to appear. The judge will set the court dates, and you will need to make arrangements to be in court at the scheduled times. The three main court dates are:

At the arraignment, the judge will read the charge against you, and you will have the opportunity to enter your plea. Your options are “guilty,” “not guilty,” and “no contest.” Your attorney can help you decide how to plea with respect to each of the charges in your case. The arraignment is usually scheduled several weeks after the initial arrest.

Next, after the arraignment, is the pretrial hearing. This is your attorney’s formal opportunity to attempt to negotiate a plea deal with the prosecutor.

If a deal isn’t on the table, then your case will go to trial. Depending on the number and severity of the charges, a criminal trial can take anywhere from hours to several weeks. You will need to be present throughout in order to stand trial and provide testimony (if advised by your attorney).

If You Miss a Hearing in Your Case

If you miss a court date, the judge will likely issue a bench warrant for your arrest. Your lawyer will have the opportunity to argue for the hearing to be rescheduled, but unless there is a very compelling reason, the judge is not likely to let you off of the hook. Criminal judges are extremely busy and their time is valuable – so they generally do not appreciate having to reschedule due to a failure to appear.

You should speak with your attorney right away if you miss a hearing. The bench warrant means that you can be taken into custody, and a failure to appear may also result in a forfeit of your bond. If you are arrested for failure to appear, you can also be held without bail pending trial.

Tim Armstrong is a Florida criminal defense attorney who represents clients facing charges for DUI and othe r serious offenses. If you missed a court date, contact us today to speak with Tim for free.

Tricking a Breathalyzer Test – Can it be Done?Previous Post
May is Motorcycle Safety Awareness MonthNext Post
Request a Call Back